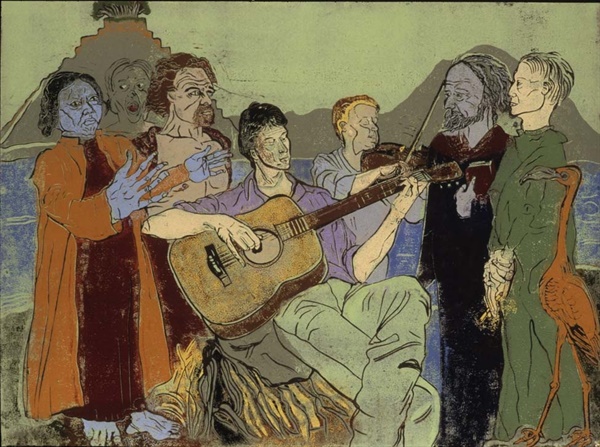 The prints in this exhibition were made for a series I did some years ago on Dante’s Divine Comedy, the story of a journey through the three realms of the afterlife: Inferno, Purgatory, and Paradise. I became interested in Dante after a death in the family. I was sitting at a bus stop on Stony Island in Chicago, when I opened a translation of Dante’s Inferno by contemporary poets. As I read, images from the book flooded my mind. As a character in Bob Dylan’s “Tangled Up in Blue” says (after being picked up by a waitress in a topless bar), “she opened up a book of poems and handed them to me , written by an Italian poet from the 13th century, and every one of those words rang true and burned like burning coal, like they were written in my soul.” The sensation must be familiar to anyone who has been struck by Dante.

Many artists and poets have been inspired by Dante’s epic. Artists like Michelangelo, Botticelli,Delacroix, Blake, Signorelli, and countless others up to the present day have either illustrated him or been influenced by him. Most artists have chosen to focus on the Inferno for obvious reasons; it is the most graphic and dramatic part of the trilogy. William Blake did wonderful paintings of Purgatory, whereas Botticelli was one of the few who did better drawings of Paradise than of Hell.

Someone said that the definition of popular fiction is the creation of an alternate universe. If that is true, then Dante’s trilogy is popular literature. His view of the afterlife has influenced an entire civilization. The traditional view of what happens after death, especially the depiction of Hell, is Dante’s.

The Divine Comedy is the story of a man called Dante who traveled through Hell, Purgatory, and Paradise while still alive. It is both a personal narrative, an autobiography, an allegory of our life, the life of an human being. Dante’s epic is not long, but every word counts. Dante was fully engaged in the life of his world, and he put into his world everything he was absorbed in, politics, literature, science, love, wars, myth, religion, mystical fervor, and patriotic loyalties. He did not compartmentalize. for him these were all aspects of the same thing and became unified in his journey. He was’nt afraid to put in his loves and hates and strengths and weaknesses. The reader knows Dante as a character who is arrogant, ferocious, proud , cruel, soft-hearted, vulnerable, curious, courageous, and easily spooked. He was a man who lived in exile from his beloved native city for most of his life, and in one sense his poem can be read as an exile’s fantasy of finding a home.

I found that making these prints was a way of thinking about the mystery of death and the possibility of an afterlife. I tried to remain true to Dante’s words, while not always agreeing with him, and putting my own thoughts and feelings into the image. These images are made by printing by hand, colour linoleum blocks, using just one block to print all the colours, which helps give the prints a look that is both ancient and modern.