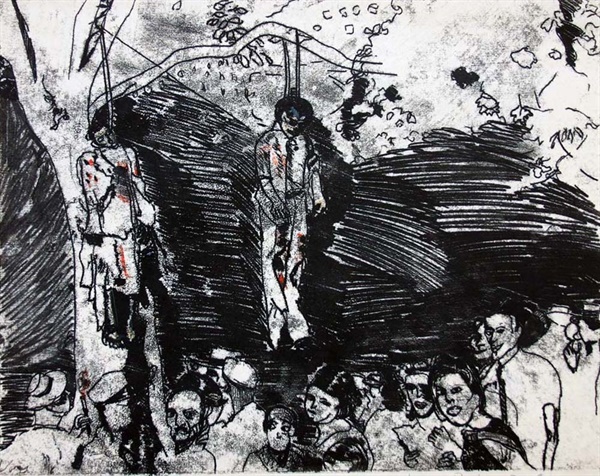 I did not know much about lynching when I began making these prints. I studied the photographs in "Without Sanctuary", based on James Allen's collection, closely, and read accounts of lynchings, but I did’nt know much about the history. The more I’ve learned about the history of lynching, the more unclear and complex it becomes. No one knows when lynching started. There was a Colonel Charles Lynch who may have given his name to the practice during the Revolutionary War. Or it may have been a William Lynch, no relation, who claimed to have carried out “frontier justice”. There is no real undisputed definition of lynching. The NAACP attempted to define lynching, as an event in which a person has been killed by 3 or more persons, who invoke words like justice or tradition, but there was no agreement on whether this was a full enough definition. One scholar begins his book on lynching by announcing that he will not attempt to define the term.

Between 1882 and 1951, approximately 5000 people were recorded to have been lynched. The real number was probably much higher. About 70 percent of these recorded lynchings were of African Americans. The rest were Mexicans, Chinese, Native Americans, Europeans. In the western states, very few African-Americans were lynched. In other words, lynching was a trans-racial phenomena. Labour activists of any colour seem prone to being lynched. Lynching was used as a way to terrorize the black community and to prevent them from exercising their rights as citizens. Black lynching victims were more likely to be tortured, mutilated and burnt, killed in cruel and unusual ways.

Many people during these years seem to have had ambivalent feelings about lynchings. On one hand, they believed that the community or any person, really, had the right to “take the law into their own hands” if the provocation was extreme enough, if the crime committed was too horrific, the evil-doer likely to escape from justice. This is an idea still with us-consider all the vigilante movies you’ve seen, or even any superhero. On the other hand even complete racists were horrified by lynchings. White supremacists, or law and order “vigilante committees”, who advocated lynching still had to defend their position, which they did by becoming extremely sentimental, in a blood-drenched way. It was a theme of community standards vs. the legal rights of an individual, enforced by the federal government, which is present in debates today.

There are many reasons given for the practice of lynching, including the American willingness to resort to violence, the suspicion of government, the dullness of rural life, economic downturns. One writer says that beyond all explanations, anyone who studies the subject senses there is a dark mystery at the heart of lynching. That is what I feel, that there is something fundamental in lynching which cannot be explained or understood.

These images are based on the photographs in "Without Sanctuary", James Allen and John Littlefield's collection of lynching postcards in America, (Twin Palms Publishers, 2008).